(BlackPressRadio) – After years trying to live down being associated with a known rapist – or at least sex offender – Yale trained actor Geoffrey Owens who starred along Bill Cosby – should be tired of taking the wrap for someone else’s sex crimes.

After the actor was job shamed by Karma Lawrence (pictured) and her girlfriend, the hats came off  and the public went in. It caused Geoffrey to quit his job but then things got better as the public out-crying of support led him to get movie offers and a $25,000 donation pledge by Nicki Minaj.

One of the very reasons that audiences loved Elvin – the character Owens portrayed on the Cosby Show – was because he didn’t really stand up for himself so we felt we had to do it for him when the Black Lesbian couple that included Karma Lawrence decided to snap his photo and sell it to major tabloid organizations. BlackPressRadio’s own Twitter account – which has long been seen as an editorial underdog for those who find themselves – but mostly their children – facing a massively popular celebrity in a losing battle – was very, very aggressive for Owens.

But now DC Livers, the founder of BlackPressRadio, says she’s personally devastated that Owens would not only choose to associated with Nicki Minaj  – who she calls “The Pedophile Ambassador – but also that he would go against Aretha Franklin‘s own advice when she was asked about Nicki Minaj and said, “I’ll pass on that one.”

If Owens takes the blood money that Nicki Minaj is trying to give him, he’ll be in bed with her  and all the children she’s visually molested – not to mention the 11 year old stepdaughter of her brother Jelani that he raped as well. 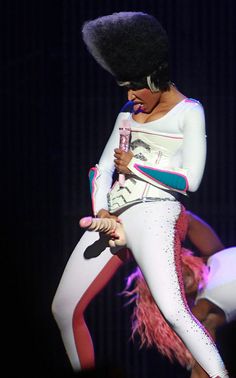 “This is so much bigger than just celebrity at this point. Geoffrey’s dad, Major Owens was a U.S. Congressman. He’s now involving Tyler Perry who has built a reputation on trying to preach God’s word into his work – not to mention that Tyler Perry was also a victim of child rape.

For Geoffrey to accept the blood money from Nicki Minaj – who was somehow successful in getting Serena Williams to forgo her squeaky clean “New Mom” image to produce the very offensive “Queen” commercial for Beats Audio – shows that Nicki understand that her only way back into good graces is to use the celebrities who fall vulnerable to her,” said Livers, who studies the trends in Black America using technology to create predictive conclusions that are often spot on.

“Serena’s normal audience did not like seeing Serena in the Queen ad. It has an eerie double meaning feeling that made them uncomfortable – not to mention made them wonder why Nicki seemed like the star and Serena seemed like the cameo,” Livers said. “Nicki knows that if she gets Serena, Geoffrey Owens and other celebrities’ audience she’ll be able to get her rapist brother off the hook. It’s perfectly evil and perfectly Nicki Minaj,” said Livers.

This is not her first time protesting Nicki Minaj.

Nicki Minaj’s brother Jelani Maraj raped his 11 year old stepdaughter and now Nicki’s trying to get him of jail.

“When Black Girls Rock held it’s very first awards in the Bronx, I covered it. Before that they had voting and we led the charge to keep Nicki Minaj from performing at such a beautifully intended event. Thankfully, my audience came through and Nicki was NOT allowed to perform but this chick just won’t go away.

Nicki Minaj gets raunchier and more ratchet. She is an evil person in person, on her music and in real life. If you’re over 18 and that’s your thing, go for it. Free Speech is the most important thing that America offers,” said Livers.

The other reason that Owens should not accept the money is because the State of New York refuses to address celebrities efforts to pass the Child Sex Act Law that would have allowed them to sue priests and other adults who rape, molest, impregnate or kill them. But as bad as that sounds, Livers says it gets worse.

Child Sex Dolls should be banned but are in big demand so more are coming and it’s totally disgusting.

“Child Sex Dolls are legal in New York state, which is the most disgusting thing you can imagine. These life size dolls look and feel like human but their mouths are wide open and lined with material that makes it pleasurable to pedophiles. You heard that correct. People like Jelani Maraj – Nicki Minaj’s brother get tired of playing with dolls and so – in his case – he started playing with his 11 year old stepdaughter. Nicki is using her power to try to exonerate him, even asking Kim Kardashian to help her. This is the same lady that uses dildos in front of kids in concerts? Oh heck no!,” said Livers.

“What does Geoffrey Owens  hope to accomplish by accepting money from Nicki Minaj? I have a friend who works on Elementary – a show that Owens has worked on recently – and their budget is quite amazing. If he was honest about work being more important to him, he should earn it  working not accepting CHARITY DONATIONS from low energy people like Nicki Minaj because if he does, we should not support him,” said Livers, who has been working for over three years to get Twitter to remove the hashtag #DadSonIncest that features graphic and sometimes brutal videos and photos of boys raped by their fathers.

Someone has to stand up for these little kids, especially little boys like Tyler Perry was when he was abused.

Someone has to stand up to Nicki Minaj because she purposefully exploits this situation after all when President Obama signed the law to prevent people from discriminating based on sexual orientation the public went along with it because we thought he mention something else but now out-of-the-closet pedophiles are running for elected office. It’s clear that what he meant was way more that what the public bargained for.

At press time, it was not sure what Geoffrey Owens will do with the blood money from Nicki Minaj but one thing is certain, he’s in for years of trouble if he does.