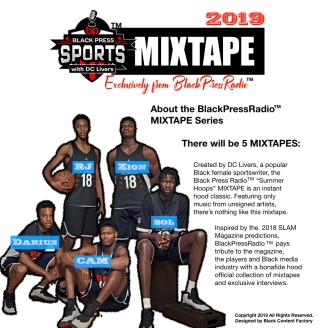 The project has so much heat and it’s so HOOD OFFICIAL that it’s got the corporate board rooms salivating trying to figure out how to get involved. The answer is simple: YOU CAN’T.

This one is strictly for the streets. No C-Suites allowed. No marketing pimps to water down the brand because this is about something money can’t buy: STREET CRED.

Sure for brands it’s just a money grab but errrrbody from the new NBA Rookies like Zylan Cheatham, RJ Barrett to veterans like Kevin Durant, Carmelo Anthony, Kyrie Irving and even LeBron James KNOWS it’s all around winning the hearts of the streets.

If you don’t BRING IT, the hood is gonna let you know. This ain’t the NBA. It’s way bigger than the NBA. We’re DISRUPTING the NBA by changing the way you think of the letters. We’ll be NURTURING BLACK ATHLETES because they’re just one injury away from riding the bench or one bad mistake from being traded so we going to help them focus on the future including reclaiming some of their intellectual property, helping them have more control over their likeness and more say over their lives.

Only Black Press Radio can take you deep inside the streets to the best courts in every hood.

We RECLAIMING our content. Every court. Every city. Every player. One street ball game at a time.

Don’t look for @djkhaled to yell on these tracks. We’ve hand selected the HOTTEST NEW TALENT STRAIGHT FROM THE STREETS. No GENTRIFIED HIP HOP on these mixtapes. Errrrrthang is 100% HOOD OFFICIAL!

STAY TUNED and prepare to get your heads knocked! INSTAGRAM: @BlackPress_Radio (INVITATION ONLY) for giveaways and sponsored promotions