(BlackPressRadio.net) – It’s beyond time for the games to end and for people to get serious about what’s really going on in hip hop.

With the Gentrification of Hip Hop comes so much fuckery that at times it’s hard to keep up. But if there’s one solid message that is being sent to kids today it’s this: KILL YOURSELF.

There are so many lyrics that talk about wanting to die and death and how much better it would be if they weren’t alive. Nicki Minaj – who has Lucifer like vibes, in her actions and dress – feels like she’s hell bent on making sure she corrupts as many children as possible. Some of her music is straight up DEMONIC.

To say it like they say in the streets, “This woman is a devil worshiper.”

She’s not the first person in rap music to make sacrifices and deals with the devil or make references to devil worshiping. Consider Machine Gun Kelley, Emeniem and others.

There are actual articles to direct kids to what they call “The Best Songs About Suicide.” There’s a TV show about it – that actually got picked up for a SECOND SEASON! This is not UNINTENTIONAL.

That’s why it’s time to re-evaluate Cardi B and Nicki Minaj the way that C. Delores Tucker made us re-examine #TupacShakur and rap lyrics. Every chance she gets, Cardi B uses her social platforms to go as far as she can with sexually exploitative content. Instagram should more to protect children.

Tucker dedicated much of the last few years of her life to condemning sexually explicit lyrics in rap and hip-hop tracks, citing a concern that the lyrics were misogynistic and threatened the moral foundation of the African American community. Little kids that bullied McKenzie Adams – the 9-year-old girl who committed suicide listened to Nicki Minaj and Cardi B music a lot. They taunted the little girl so much she killed herself. It’s time to hold Nicki Minaj and Cardi B responsible for their lifestyle choices AND lyrics.

Called “narrow-minded” by some rappers who often mentioned her in their lyrics, Tucker picketed stores that sold rap music and bought stock in Sony, Time Warner, and other companies in order to protest hip-hop at their shareholders’ meetings. She also fought against the NAACP’s decision to nominate late rapper Tupac Shakur for one of its Image Awards and filed a $10 million lawsuit against his estate for comments that the rapper made in his song “How Do U Want It?” on the album All Eyez on Me, in which Shakur rapped “C. Delores Tucker you’s a motherfucker / Instead of trying to help a nigga you destroy a brother”. In her lawsuit, Tucker claimed that comments in this song, and on the track “Wonda Why They Call U Bitch” from the same album, inflicted emotional distress, were slanderous and invaded her privacy. This case was eventually dismissed.

Other rappers have taken similar stances. In his song “Church for Thugs”, The Game raps “I’ve got more hatred in my soul than Pac had for De’ores Tucker.” Jay-Z chimes in as well, with the lines “I don’t care if you’re C. Dolores Tucker or you’re Bill O’Reilly, you only riling me up,” from The Black Album’s “Threat.” Lil’ Kim also referenced her in a leftover track, entitled “Rockin’ It”, from her second studio album. Kim raps “C. Delores T., Screw her, I never knew her”, after Tucker dubbed her music as “gangsta porno rap” and “filth”.  Much of KRS-One and Channel Live’s “Free Mumia” is a direct criticism of what the MCs see as Tucker’s misplaced energy. Lil Wayne also referenced her in his leftover song “Million Dollar Baby” rapping “Can’t be banned I’m sorry Miss Delores.” Tucker later went on to serve on the Advisory Board of the Parents Television Council until her death in 2005. Eminem referenced her in the song “Rap Game” by D12 rapping “Tell that C. Delores Tucker slut to suck a d*ck.” 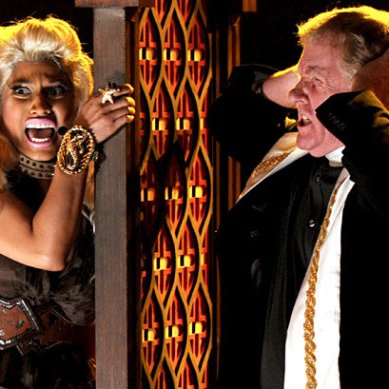 Years ago, C. Delores Tucker summoned DC Livers to her office in Maryland for a “sit down discussion.”

“It was like she was obsessed with me,” said Livers. “She called me constantly until I agreed to the meeting. I went to her office to see what was going on. Her husband met me at the door and said, ‘Thank you for coming. She’s been on a tear about you. She seems to think you’re the young version of her. She wants you to continue her mission.’ I remember thinking, “Huh?! You want ME to take on Tupac and Biggie and Congress? Um….nope. I’ll just be going now,” said Livers. She said stayed and met with C. Delores Tucker and did end up agreeing to try to help – on a much smaller level – to protect young girls from hip hop.

“I held a Girls Empowerment Brunch at the Dorothy Height Conference Center at Operation Hope in Washington, DC. It was great because Amelia Ismore – a New York City spitfire and mover and shaker in hip hop came. Dara from Charm School reality show came. I remember asking the women to wear a bandage at one of our events related to the Hip Hop Journalism Summit. The bandage represented ways that hip hop lyrics had hurt them as Black women. This one guy because very upset when he saw that Amelia had on a bandage. He said, “Who hurt you, sis?” and she told him how hip hop had disrespected her and hurt her and called her a bitch and made her feel bad about herself. The look on his face when he realized what she was saying, the role he played in that was shattering. I mean, I didn’t really think it was gonna be that big a deal but in the end, maybe C. Delores Tucker was right about me. Maybe she saw what I couldn’t see in myself but I see it now. I see that Cardi B and Nicki Minaj are talented, beautiful women who have been hurt by hip hop. They have been damaged and now they are damaging other young girls and women. It has to stop. It just has to stop before we lose another McKenzie Adams. We can make this right. We can’t mess this up,” Livers said.

That year Congress held a hearing on rap lyrics. I remember they called Debra Lee and damn near all of BET to testify among other people. I remember sitting in the back with Master P talking about the fact that he and David Banner were about to testify. I was awestruck by that. The two least suspecting people to be called in to testify by Congress were the perfect people to speak on this topic. Master P wanted to talk about a Hip Hop Credit Union he wanted to start, a brillant idea I wish he’d been able to do. I just wanted to get out of there because I knew that I’d get caught up in a lot of mess if I stayed,” said Livers. “But BlackPressRadio is – and has always been – the people’s station. We have to be where they can’t go so I stayed for the entire day. It was interesting. You can even see some of the testimonies on YouTube even today.”

Ironically, soon Livers is planning to return to Congress to try to pass a law that protects children. She’s also calling for schools to ban Nicki Minaj and Cardi B from speaking to children in public schools.