EDITOR’S NOTE: As of May 4, 2018, Kanye West, Yeezy shoes and Adidas are BANNED from BlackPressRadio.net and all of our properties including Twitter.com/BlackPressRadio for his decision to make a racially charged advertisement in which his new “Trump shoes” are depicted stepping on the neck of former NFL quarterback Colin Kapernick. At a time when ADMITTED RACIST Josh Allen is allowed to play in the NFL but peace seeking Kaepernick is banned, it was only right. Kanye and Adidas plan to profit millions, negatively influence Black men and youth while green lighting mass racism with the shoes. Following a week of inflicting pain on Black people around the work, it’s time to let Black people heal not to make it worse by releasing this inflammatory advertisement. We can expect racism from brands like Adidas but we shouldn’t have to expect that from Kanye West who once was our hero for saying, “George Bush don’t like Black people” following Katrina. Who will dry Black America’s tears now? To all the children reading this, please know that you can make a difference by NOT supporting Adidas or Kanye West. We are working on an immediate solution to this situation by requesting a meeting with Adidas and Kanye to figure out a solution. Many refer to BlackPressRadio as “The Black Associated Press” or “The Black Getty Images” because they trust us to provide stories that affect our lives. We take that very seriously and we vow to help you find solutions to stop making racists rich. 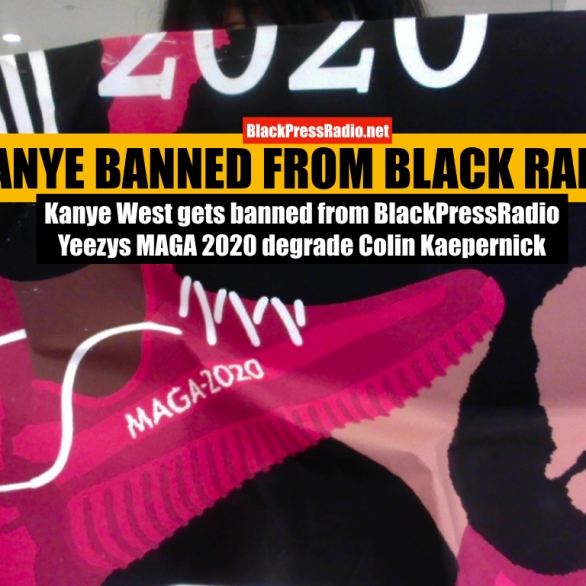 (BlackPressRadio.net) – When it comes to Kanye West, many of us reporters who have dealt with him have a lot to say, but I tend to be more quiet on the topic for a variety of reasons. The easiest reason is I have a personal conflict of interest.

I’ve only met ‘Ye a handful of times but I was scheduled to collaborate with his mother, Dr. Donda West just a few weeks before she died. Sometimes you meet people and you just click, which was the case for me and Dr. West.

The year was 2007 and I was riding high on the unintentional wave of BlackPressRadio becoming the nation’s first Black-owned podcast and online radio station. I was in extreme demand when I agreed to do a quick interview with her at the Congressional Black Caucus book festival in Washington, DC. I remember trying to rush her along during the interview because I was due in New York City to present the Black Press All Star Awards  “Black Author of the Year” award to K’wan at a private ceremony in Harlem. She wasn’t having it. She had a lot on her mind and wanted to talk, particularly about Kanye but more specifically about herself.

Upon realizing I wasn’t getting out of the interview with a two-minute soundbite, I decided to go with the flow. After the interview we spoke for about 20 more minutes off camera. She shared personal stories of what she called “the boys,” which included Kanye, John Legend, Common and Consequence who basically camped out at her house. She grew tired of them “murdering the English language” and began to teach them about the impact of a thesaurus and prose. She was a teacher at heart and she wasn’t about to sit back and allow her home to be turned into an Ebonics camp.

Soon she started hearing The Boys improve the quality of their lyrics. Dr. West taught The Boys the importance of poetry and rhythm but she confessed she never thought they’d all end up winning Grammys. Dr. West shared some of her personal dreams with me about where she wanted to go. She asked if I’d work with her although she wasn’t exactly sure what capacity. She was just starting to step outside of Kanye’s shadow but she felt that she could trust me with her vision.

At first, I promptly – and politely – said no. “I’m not a publicist,” I remember saying. “I’m just a reporter.” But if you’ve ever met Dr. West you know, when she asked you’re going to end up doing it. I promised I’d be in touch with her via her publicist and raced to catch the first thing smoking to Harlem to attend the ceremony. A little while later, I followed up with the publicist and felt the gut punch when I learned she’d died. It was pretty tough because she was a nuturing spirit.

I covered Dr. West’s funeral remotely tracking down the African American newspaper in Oklahoma City where she grew up. I felt a personal obligation to remind people that she’s more than just the mother of a hip hop star, but no one really got to know that. She died too soon.

The Dr. West interview sparked many interviews I would do with hip hop moms including T-Pain, Ne-Yo and other moms. I tried to be kind but I also wanted to make sure we got to the truth. I remember having to ask Ne-Yo’s mom to address the gay rumors. I remember being intimidated by T-Pain’s mom, Jacita. She reminds me of Jim Jones’ mom, Nancy. They are very protective mothers who love their sons.

Years later when Kanye would have a drama fit online or offline, I’d think back to Dr. West. I had spent nearly an hour looking her into her eyes and witnessing her essence when it came to her son. It felt awkward to have one of the last interviews with Dr. West – her voice from the grave – and not certain if Kanye had heard it. Some times it felt that she was trying to send a message to me about him but in the media business there’s just not enough time to revisit stories so I’d kind of forget about it.

So recently when Kanye had his latest breakdown – or as he likes to call it – #BreakThrough – I again thought of Dr. West. She loved him so dearly and they were so close. Perhaps too close. Kanye’s ability to cope seems to be very difficult.

A source VERY CLOSE to the situation told me that Kanye’s been thinking of death a lot. When he gets manic, he’s barely controllable. The source told me he’s been wanting to “join his mother in heaven. It’s like Kanye was saying, “I want to die. I believe that liposuction sort of like Bobbi Kristina emulating her mother Whitney Houston with that bathroom scene only to actually end up dying in almost the exact same way as her mother. He’s just not coping well.”

These days it’s virtually impossible to reach Kanye. It’s unlikely that Kris Jenner will ever allow him to speak to a Black-owned media outlet. The closest the world will get is the recent interview with Charlamagne tha God, whom Kanye called “our generation’s Oprah.”