(BlackSportswriter.com) – This season has been a major moment for me as a Knicks reporter and fan. Knicks super star Carmelo Anthony has been staring down the barrel of some heavy shit at The Garden. The media – admittedly mostly Frank Isola of the New York Daily News – has been victimizing Carmelo with #FakeNews and intentionally cost him an All Star position. A few nights ago as the Knicks played the Cavs, Isola and other media thought they were going to finally put the nail in Carmelo’s coffin. Like the smart man he is, Carmelo took his time coming from the shower to talk with us and when he did, his attitude was astounding.

On February 4, 2017 in the locker room, #CarmeloAnthony felt more like a motivational speaker than a basketball player. The three-time Gold Medal Olympian, NCAA Champion who has NEVER NOT made the All Star team in his entire career walked in the locker room like #PurposeDrivenLife was his middle name. He stood tall, he didn’t get angry, he didn’t flinch and he stood there on that firing line as one-by-one the Knicks media took shots at him. 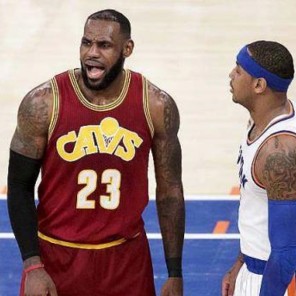 Then Carmelo took a question from me as my voice shook knowing I was on national TV, being streamed LIVE on NBA TV and other places. My question in many ways could be considered a betrayal of my journalism profession but watching him being trumped and lied on and his family having to watch that made me feel some kind of way so I took a deep breath and asked him: “Carmelo. Do you think the #FakeNews you’ve had to deal with cost you All Star [votes from] the fans?” He looked me in the eye the entire time like “Thank you.” He would be fined so badly if he said anything other than what he said, “I don’t really want to say anything about that…..” He kept on talking without saying anything, looking me in the eye and we both knew that the very reporters who had been assassinating his character were getting the point.

I left the locker room immediately after asking that. There was nothing left for me to do or say. For the rest of the night, I heard reporters whispering, “She called it “fake news!?” and the like. It was not the most comfortable feeling I’ve had but I could live with that because I keep wondering what he says to his young son, Kiyan, when he’s bullied at school because of his dad or the really effed up articles that have been running lately. Then I saw this picture and I knew: #CarmeloAnthony is a warrior. A champion. A dreamer who won’t let anyone change his path. Not the haters disguised a sports reporters. Not the name on whatever jersey he wears next year. Not the view he sees out of whatever window in whatever town he’s in next year. He knows he’s already won. I’m so inspired this Saturday morning my the life lesson I’ve gotten and the honor it’s been to work with Carmelo from Day One of his Knicks career. Even if it ends.

It’s not what people say about you that matters. It’s how you handle it. It’s how you remind yourself of who you are and what you’re here to do that counts. I’m calling it: The Carmelo Effect and I’m going to adapt it to my own life and teach these principles to my own child.

Watching the whole fake news drama play out, seeing how Frank Isola is loving the attention and how the other reporters are secretly laughing at him makes me rethink my whole decision to write about sports. I hope that one day we’ll find a way to restore honor – or at least FAIRNESS and ACCURACY – back into sports reporting. Until then, we’ll all  have to listen to Frank Isola spin big tales and deliver little facts until the NBA trade deadline passes.