by DC Livers Exclusive to BlackSportswriter.com

(www.BlackSportswriter.com) – Stephen A. Smith, a die hard but disgusted Knicks fan, recently got so upset with the direction of his favorite NBA team that he instituted a self-imposed boycott. He kept his promise so long time that he became a ghost at The Garden. While Stephen A. Smith was away, his presence was felt and his words hung in air haunting fans who feared their beloved Carmelo Anthony might soon be gone.

Smith has not been shy about his feelings that Phil Jackson is bringing the team down. He is quick to point out Jackson’s “incredibly disappointing” loss record and has questioned every decision the GM has made – especially the Porzingis pick. Stephen A. Smith also been crystal clear that team owner Dolan doesn’t have “The Keys” like DJ Khaled says when he refers to the keys to success. Smith has been so vocal that it’s become uncomfortable and with every episode of his new show, “First Take,” Smith seizes the opportunity to remind the world that Knicks are not worth his presence. So it was good to see him as he was heading out of The Garden after the Knicks depressing loss to Russell Westbrook’s Oklahoma Thunder. I caught up with him and he broke down the Knicks future in 30 seconds.

While I generally adore him and agree with much of what he says, we disagreed about the coaching staff. I like Jeff Hornachek – whose school boy grin is hard not to like and his giddiness when the team wins is almost contagious – but I’m not completely sold on him as a coach. Mostly it’s because he’s so dang likable. Plus, there’s the “Phil Factor,” that the hood talks about daily. 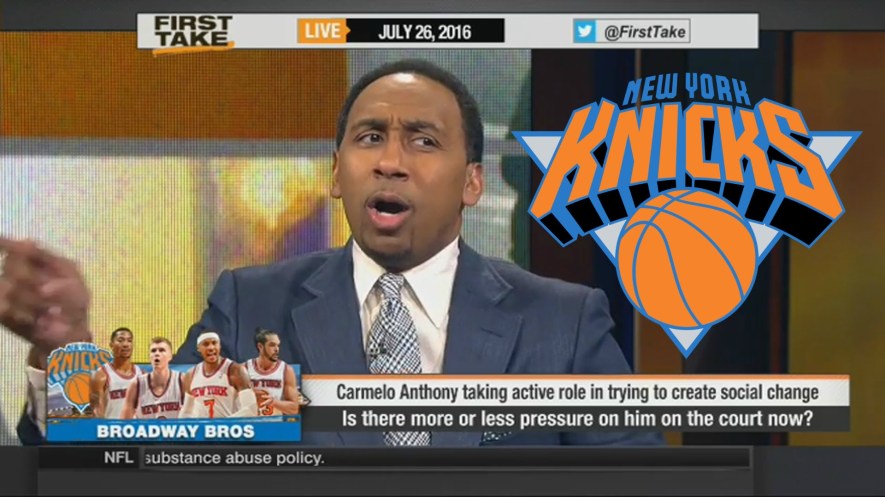 Stephen A. Smith said he was done with The Knicks but….he’s back

In the shadows of New York where the poor people live paycheck-to-paycheck but never miss a Knicks game update, these are the very people who really decide the future of the team. You make these fans happy and you’re on to something. That’s why I understood JR Smith and Iman Shumpert. That’s why I knew that the team didn’t do them right. The Knicks treated them as professional athletes but I knew that they are celebrities who happen to be professional athletes. The stardom is always gonna be secondary to the hood where you must prove yourself daily. Hornachek hasn’t won over the hood. Heck, he can’t even win over Phil Jackson who deserves all of our respect for his own career but isn’t really allowing Hornachek to make much of his Knicks coaching debut.

To me, the Knicks are always best when they are jagged edges, flawed men, rough necks. Posse men. That term – which I too feel was meant in a racial manner but somehow I do not feel Phil is a racist – actually describes the type of men that make the Knicks a better team. Check the history books: The best Knicks are

bad boys, coach choking, scary men who don’t care about anything but winning – on and off the court.

If you ask me, the Knicks should bring Bill Laimeer to coach the Knicks. Even if it’s not as a head coach – which it should be – he’s gotta be a part of toughening this team up. You’re NEVER gonna convince me that Jeff Hornachek is going to turn into Jeff Van Gundy and wrap himself on the leg of a player and be drug around The Garden if there’s a player brawl. He’s not going to ride or die like that. He’s going to break up the fight, shake his head and try to get the team “back on track.” That’s just not going to be enough for the Knicks to make it beyond the first round of the playoffs, even if Stephen A. Smith feels otherwise.

When the Knicks had Rasheed Wallace, Metta World Peace, JR Smith, Kenyon Martin check the stats on how many games they won. Heck, even Carmelo Anthony had a gully season and waited for Kevin Garnett at the team bus. That kind of “heart” as it’s called in the hood is what makes the team better. You’re not going to get JR Smith’s attention by telling him executives expect more from him but you will get him to straighten up if he has hear criticism from the hoods of Harlem or the bottom parts of Brooklyn. That’s the motivational factor for posse players like JR.

Even Porzingis has swagger that the hood is paying attention as proven by rapper Ja Rule who recently said “We go as Porzingis goes.” That kind of hood stamp of approval cannot be bought or paid for.

Even Carmelo understands that which is why he angered league brass when he sought out the hoods of Brazil and took his son, Kiyan, to the legendary basketball games called “The Rucker.” Anthony understands that the mark of greatness for NBA players – especially Black ones – are made by what they do in the hood. Anyone can memorize a spot on an NBA court to hit a shot.

“I think it’s harder to play at “The Rucker” than in The Garden,” said Allen Iverson, who played and managed to impress.  (see the video below)

Anyone can practice a three pointer in the NBA arena because it never changes. It’s regulation. But in the hood, street ball is where real legends are made. Ask Kevin Durant or Kobe Bryant whose time at “The Rucker” was so amazing he was named “LORD of the RINGS” by the “grand chief of Rucker basketball.” The same people are calling Melo “Lord of No Rings.” 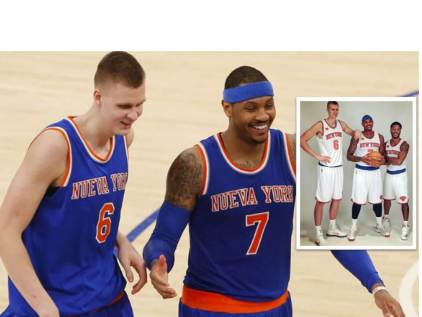 Where I do agree with Smith is on the mildly delusional passion that we both share for this team. We know in our hearts there can be more. We’ve both witness the life changing intensity that can happen in The Garden when the team is winning.

I still consider 1999 the greatest year of my sports life because I managed to follow the team during every game of the playoffs. I was even sucker punched by a couple of Pacers fans at the now gone Market Square Arena because I was holding a sign that read, “Knicks beat the hicks,” a phrase Spike Lee had made famous. The farm boys didn’t really like my sign and I have a tiny scar to prove it. I treasure that scar as a rite of passage that all true, lifelong Knicks fans must have in order to be able to criticize the Knicks. I don’t care if the Knicks win or lose, I’m riding for them. I can say whatever I want, but NO ONE – and I mean no one else is allowed to do the same, except for tried and true Knicks fans like Stephen A. Smith.

But until the Knicks find a way to re-engage the fans every single game, the players will not perform at their best. If they don’t perform at their best the team will lose confidence and begins to fall apart. That’s the one thing that Stephen A. Smith and I are hoping doesn’t happen. We’ve waited over a decade for a really good Knicks team. If they can be toughened up, we just might have to cancel our plans for May in order to cover the Knicks in the playoffs. If not, there’s just no telling how this season is going to end up and even I agree that Carmelo would be silly not to explore his options.

There’s simply NO HEART in The Garden right now like Patrick Ewing used to bring. Every game, fans should be given towels or t-shirts. The color orange or blue should be everywhere. The players feed on that, just ask Kristaps Porzingis who scored a career-high 35 points then turned around and said, “The fans really got me going.” This is a man who will one day play in The Rucker. He’s got the moxy to do it and excel. If he stays in New York City, he’ll have to play in The Rucker. It’s not negotiable. In order to be a truly good player, you have to play in the hood. Period. Besides he beat Michael Jordan and everyone else for his rookie year stats. He’s scored 35 points as a 20 year old kid in The Garden in his sophomore year. The Rucker is coming for him and I personally think he’s ready.

From hard news to behind-the-scenes sports updates to as-it-happens celebrity interviews, DC Livers has earned a reputation for being the best at what she does – and often the first to do it. In fact, she was almost booted from covering a professional sporting event for using Twitter because the team had never heard of it. In 1996 – Livers who is founder of BlackPressRadio.com which enjoys nearly 500,000 impressions per month on Twitter alone – became one of the original Black girls who wrote HTML code and helped create some of the nation’s most impressive urban online and digital properties delivering news for African Americans and people who love them.  See more about DC Livers here.

DR. J at THE RUCKER

KOBE BRYANT at THE RUCKER